RUSH: So they got Biden out of the basement in Delaware, and they took him out to a wheat field. And he's standing out there in front of a cheap looking little wicket fence, and it's on his side, he's not actually in the wheat field. He's some distance from it, but it's within reaching distance, he could turn around and reach over the fence. And at the beginning of it you can see that there's some bugs, like insects, and Plugs is trying to, you know, get rid of them, trying to wipe them off himself.

So I'm asking, "Why would they send the guy out to a bug infested wheat field?" And it became crystal clear. Because Plugs decided to make a speech on the climate and how Trump is destroying it. He said that there are four historic crises that are threatening the United States at this time. One is the pandemic. The other is the economy. Another one is climate change. And the fourth crisis is white supremacists.

Yes, my friends, the pandemic crisis, the economic crisis, the climate change crisis, and the white supremacist crisis are the four crises facing America. I have a couple of sound bites from Plugs' speech. He took no questions again, by the way.

This is an event that's outside and I can't wait for the photos of the event because we're gonna see that there were probably no more four media people there, and they're going to be separated by six to 10 feet. They're gonna be inside of white circles that were drawn for them to stand inside of. It's gonna look ridiculous. And he took no questions whatsoever because he can't. So in the first bite he calls Trump a climate arsonist and says that America is basically going to be on fire and underwater if Trump is reelected.

RUSH: Now, ladies and gentlemen, aside from how Plugs sounds on the verge there of slurring the words and running them together, stop for a moment and just analyze the substance of what he said here. If we have four more years of Trump's climate denial, how many suburbs will be burned in wildfires?

What Trump is in denial of is the concept of man-made climate change. Trump does not accept that American progress and advancement is to blame for climate change. The fact that our climate is changing is acknowledged. It changes every day. It changes constantly. It is never static. Our climate is constantly in various stages of change, but there's nothing we can do about it. We don't stop the change that the climate's engaged in, and we can't create the change. It's beyond our capabilities. 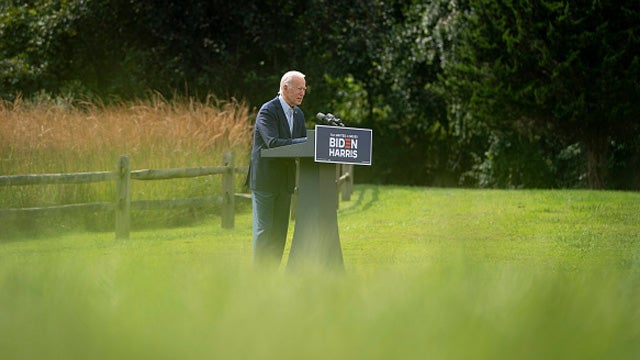 But the Democrats want you to believe that humanity, particularly Republican human beings, have the ability to start fires and to make them worse and to start hurricanes and to steer them and to increase the number of hurricanes and their intensity. And aside from starting fires, which anybody can do, all of that is flat-out BS. Because if we had the kind of power that Joe Biden assigns to us, then we could stop all of this.

And they are trying to convince you that they can, when they can't. They can't stop the fires. Not the way their current environmental policy is. You know why there are fires in California right now? Wrong question. Do you know why the fires are spreading so rapidly? Is because the Democrats do not permit the removal of all of the deadwood that ends up in a forest year after year after year.

Forests are like any other living organism. Elements of them die. Trees die, various members of the forest die. If you don't go in there and clear-cut that stuff out of there, you are essentially allowing the buildup of kindling wood. When you deny any management of forests, then you are creating a tinderbox circumstance. And this is exactly what California officials have done under the belief that going in and tampering with whatever they claim nature is is going to damage it.

The fact of the matter is, we have domain over the environment. We have learned things that we can do to limit the damage done by lightning strikes or random fires that are started for purely accidental reasons. You simply take the fuel away from the fire. That's what you do. The Democrats do not permit that policy. You cannot remove the fuel.

Let's contrast California with Florida. Florida is much hotter than California and consistently so. Here in Florida, South Florida -- well, the whole state in the summertime -- we have a tropical existence. We have high humidity and high temperatures. The feel-like temperature right now in Florida is 101. The real temperature is 87. The feel-like temperature is 101. That's humidity. It's like this all summer. It's like this five months of the year through the month of September. 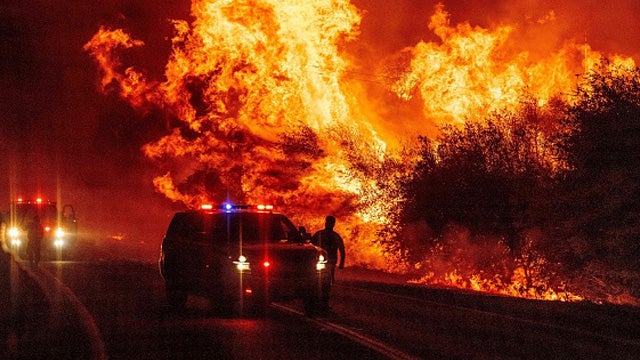 At no time do we get a tweet from a mayor telling us to turn off our appliances. At no time do we get a tweet saying the power is gonna be turned off for three hours. It doesn't happen. And air-conditioning, for those who have it in Florida, is a 24/7 proposition practically year round. There are days where you turn the air-conditioning off because you don't need any or you might even need heat for a couple days, but the point is we have a far greater burden on our electrical grid than California does.

Why, then, do we never get rolling blackouts or brownouts, why are we never told that we're gonna be losing power for three hours every day for the week? Why are we not told to unplug the microwave or the toaster? Because we in Florida, where there is no income tax, by the way, we in Florida use fossil fuels to power the various grids that provide electricity throughout the state. In California they don't. In California they have gotten rid of natural gas power plants to the tune of like nine gazillion megawatts or whatever, they have literally gotten rid of it, and they have replaced it with wind and solar.

Wind and solar cannot replace what they have gotten rid of in California, especially if there's overcast or if there isn't any wind, then you get no power from it. If there's cloud cover, you get no power from the solar panels. But in California, the people there were lied to enough that they stupidly voted to get rid of fossil fuel generated electricity, under the guise that they were saving their planet from climate change.

They ought to be having absolute utopia perfection in California. And yet the state is burning alive. The state is burning alive, and somehow, according to Joe Biden, this has become the fault of Donald Trump. This is an absurdity that is as senseless as anything Biden has ever claimed. What's happening in California is the result of liberal Democrat policy implementation. There is no other explanation for this. It has nothing to do climate change, even, other than Californians believing in it. 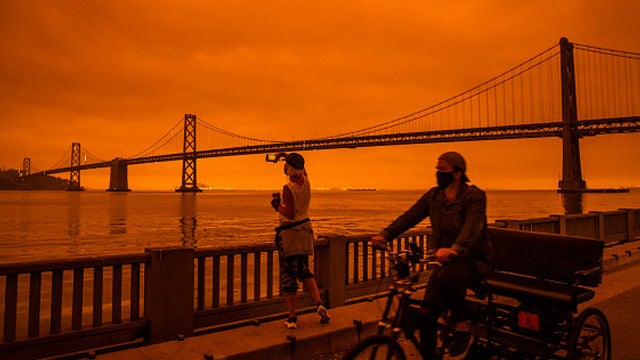 They believe in man-made climate change so they get rid of fossil fuels. Fossil fuels, oil. Oil is gonna destroy everything. So they replace oil and natural gas, which is the cleanest thing you can get next to nuclear, and they get rid of all of the cleanest ways of producing abundant power with wind and solar. They do not clean out the deadwood from the forests. So lightnings strikes happen, idiots leave matches burning, flick a cigarette away, fires start however they start.

Then they've got rolling blackouts and no electricity because they have systematically destroyed their own ability to produce enough to meet the needs of the people of the state under the guise that doing so destroys the planet. So these people in California, they have fixed the climate change problem. They've got green energy. They've got renewables. They've got solar, and they've got wind, and they got rid of fossil fuels, right? They ought to be happy and singing the praises of utopian climate change. Except the state is burning out of control, and there are rolling blackouts, people are doing without electricity. 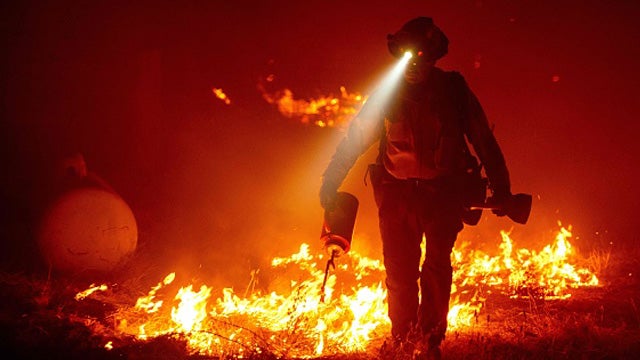 Thing is, the people of California did not have this forced on 'em. They voted for it. They bought it. They believed it. Now Biden's out there claiming that all of this is Donald Trump's fault because he's a denier? I'll tell you, with everything California's done, the sensible thing would be to deny that climate change is relevant because these people have proven it. They have proven climate change has nothing to do with what's going on in California.

Well, they've taken the steps to eliminate the ravages of climate change. They got rid of fossil fuels. They got wind and solar out the wazoo. Green energy. They got renewable energy. They've got sustainable green. What is happening in the state? You can look at it as easily as I can and see.

RUSH: Did I call this or did I call this? Here is the picture of Joe Biden in the grass and wheat field. Look at this, exactly as I predicted. Folks, I swear to you I did not see this picture before it was furnished to me. You got Biden and few reporters there, three of them in circles. Look how far they are from him. Look how few reporters there are. You got the wheat field behind him. He's in the distance there at the podium.

He was wearing a mask for much of this. And there's no need for that. He took no questions, and these reporters didn't even try to ask any. They didn't even care. They were just there as functionaries. What an absolute embarrassment.

Meanwhile, Donald Trump bounds off Air Force One in Sacramento, does an impromptu news conference with no teleprompter, takes questions from the assembled Drive-By Media, and then has a meeting with local officials about the fire situation and heads off to do something about it.

And not a single action that Trump took is anything Biden could do. Biden couldn't bound off the airplane, have a meeting, do a press conference with the media, without a teleprompter and then meet with officials and go off to do something about the fire. The best Biden can do is this picture right here that we're showing you on the Dittocam. And, by the way, it'll be at RushLimbaugh.com. You can see it there as well. 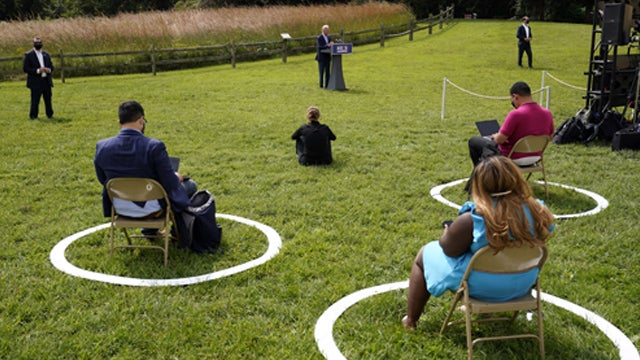 Holy smokes. It's like every other meeting that Biden has with the media, inside or out -- and look at these reporters. You know, they're like buffoons. They're told to stay inside their circle, and they stay inside their circle. And they're told not to ask questions, and they don't ask questions. And when Biden wants to leave, they dutifully stand up and applaud as he walks out.